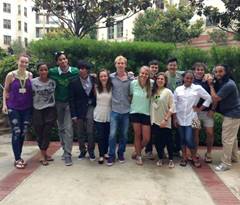 “When my parents told me about SuperCamp and how my Granduncle Bob was such a huge supporter of it, I wasn’t sure what to think,” said Samantha Hochmuth. “They said he sent his grandchildren and other people in his life because he believed it helped them so much, but I didn’t know what it was and honestly wasn’t excited to go,” she said. “I was only excited to go because my family was making a vacation out of it.”

Sammy, as she is called, traveled to California from Wisconsin, and even though she was reluctant to go, she decided to change her attitude and go with an open mind—and she is so glad she did. After attending Quantum U, SuperCamp’s college-age program, she recalls not only feeling more prepared to attend college and succeed in that kind of academic setting, she also felt more confident and stronger within herself. One of the activities that stood out for her was “board breaking,” where students break through a board that represents a barrier to their goal that is written on the other side of the board. “There is no feeling like breaking through that “barrier” with your hand, and how empowered you feel afterward,” she said as she recalled the activity.

Sammy remembers leaving SuperCamp with a heightened self-confidence, new friends, and much more . . . “I felt like I got my life back.” She also noted that her brother, Hunter, who went to SuperCamp the week after Sammy thanks to Bob and Mary Wadsworth, grew in confidence. Sammy attended his closing celebration and recalled being brought to tears because she could see how much more confident and empowered he had become as well. “It was amazing to see his transformation,” Sammy said. “I’ve never felt closer to my brother and our relationship changed at that point.” Sammy and Hunter’s mother, Nancy, believes one of the biggest things for both of them was that that after SuperCamp they felt safe to be themselves.

Sammy had wanted to return to SuperCamp, however at that point she was too old for the program. She particularly wanted to go back and pay more attention to the teaching methods as she planned to become a teacher. Sammy has now graduated from college and is currently studying for her MBA at McKendree University where she is also a certified athletic trainer and graduate assistant.

To this day Sammy still reads the journal that she kept during her week at SuperCamp and refers to it often when she needs a reminder of that empowerment she felt. “I never really got to tell my Uncle Bob how I feel this camp saved my life,” Sammy said. “I truly believe anyone could go to SuperCamp and benefit from it. I am so lucky I had Uncle Bob in my life.”